Following up on Monday's post about NCAA Football 11, another screenshot has come out that gives an even better view of the renovated Michigan Stadium in this year's edition of the game. The screenshot can be found on EA Sports' TeamBuilder page, where people can create teams from their own customizations or already existing things. A picture of the Big House is one of the existing things in there, as are pictures of Michigan State's jerseys, which, just an FYI, are the same as last year's rather than the new ones.

The picture of the Big House (see below) shows off the northwest side of the stadium. It's definitely different to see Michigan Stadium filled with people where the old press box used to be, but this is a perfect preview of what it will look like when the season opens in September. The designers appeared to have nailed the design of the renovated Big House, even getting all of the little details of the new press box right. Check it out: 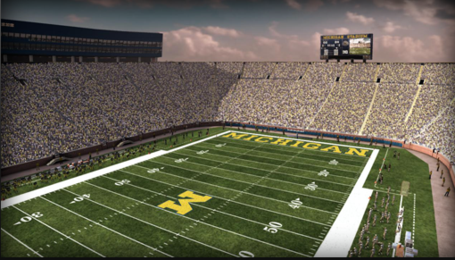