With Michigan State athletics undergoing a rebranding of sorts this offseason, one of the things that needs to be updated is its basketball court design at the Breslin Center. MSU easily could have just updated font and changed the shade of green to match the new color, but it appears that they are going in a different direction and are getting an entirely new court design, as evidenced by a recent picture of the painting currently going on. 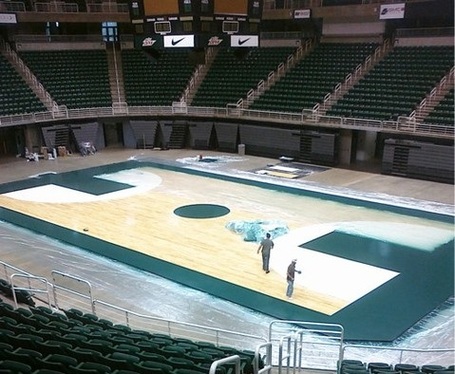 It's still unclear what the final design will look like, but it does appear that MSU is going to the two-shade look, where the part of the court inside of the three-point line (not counting the key) is a different color than the rest of the court. This is a very common design in the NBA and is also what the court looks like at the Final Four. Michigan's Crisler Arena also uses a two-shade look, although its court is a bit darker inside the three-point line rather than lighter.

What I'm most interested in seeing from the final design is which logo MSU uses at center court (the block "S" or the Spartan head), if the orange basketballs return above the free throw line (I bet they don't) and if the state of Michigan outline is anywhere to be found on the court. The old outline with the "STATE" script going across it won't be used since that script no longer is part of their brand, but perhaps they will put them on the floor with the new script.

The last time Michigan State changed its court design was in 2000 after winning the national championship (the pre-2000 look can be seen here). The current floor at the Breslin Center is actually the one MSU played on during the 2000 Final Four, as it was purchased following the tournament and repainted with the design basketball fans are used to seeing at MSU home games.