Shortly after Nate Burleson signed a five-year, $25 million deal this past offseason he took the liberty to create a nickname for himself emulating his counterpart, Calvin Johnson's "Megatron." Sticking with the Transformers theme, he naturally chose "Receptacon." Receptacon obviously sounds like reception, but also rhymes with Decepticon, which is the group of villains in Transformers. (Who knows why he didn't spell the ending the same?)

Anyway, today on his Twitter account, Burleson unveiled his new duds -- blue headphones, a shirt with his self-proclaimed nickname, Lions kicks and a blue Detroit baseball hat -- which he rocked on the Lions trip to Pittsburgh for their first preseason game. 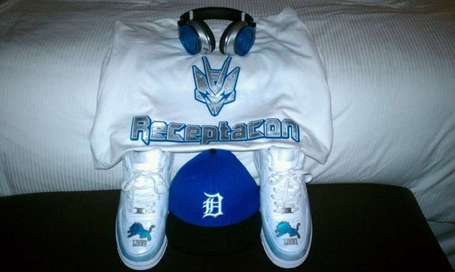 Lions fans can only hope the Lions' WR duo is as explosive as a Micheal Bay movie this year (only better). After the jump is another one of Burleson's Transformers-themed shirts, or the other side of the one above. 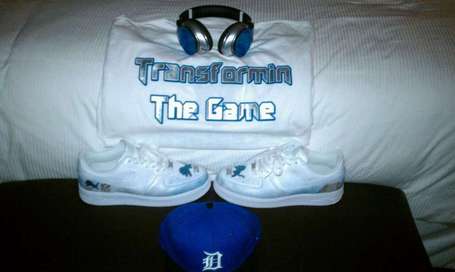 If these interested you, Burleson also tweeted a pic of his custom spikes for games.