Tracy McGrady was officially introduced by the Pistons Monday afternoon. He’ll wear the No. 1 jersey (as shown by Tom Leyden’s photo on Twitter). 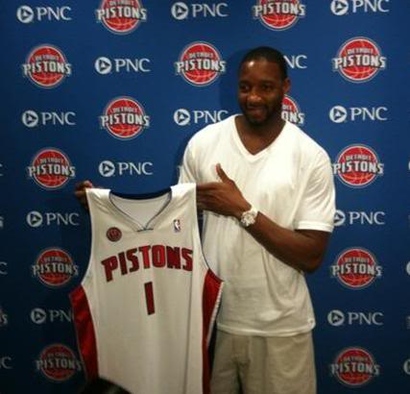 Answering questions from the press, McGrady said that he carries a chip on his shoulder to motivate himself. Yet later on in the press conference, he said the following:

"I don’t have to prove anything to anybody but myself."

What are the chances anyone among the gathered media pointed out that discrepancy? Not that it’s terribly important. McGrady does have a lot of questions to answer about the health of his knee and his ability to play a full season. (He’s played only 65 games over the past two years.)

So how about McGrady wearing the No. 1 jersey? Any Pistons fans have a problem with that one, or did that go out the window when the team immediately gave Chauncey Billups’ number to Allen Iverson?

Tracy McGrady Introduced By Pistons, Will Wear No. 1