Share All sharing options for: Mike Modano To Wear No. 90?

When the Red Wings first started to go after Mike Modano, fans started to wonder what number he would wear if he ends up signing with Detroit. Now that we know that Modano is set to join the team, that topic has come up again, and according to Helene St. James, right now No. 90 is the leader.

He can’t wear his usual No. 9, which was retired in honor of Gordie Howe. Adding a 1 in front of the 9 won’t work -- No. 19 has hung from the rafters at Joe Louis Arena since Jan. 2, 2007, when the Wings retired Steve Yzerman’s number.

Instead of adding a number in front of the 9, look for Modano to go with a clean No. 90. It’s not official yet, but that’s the way things are leaning.

In case you wondering what a No. 90 Mike Modano jersey would look like, here is a preview: 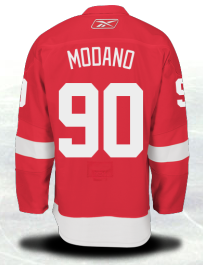