Looking At How The Big Ten's Divisions Stack Up

Share All sharing options for: Looking At How The Big Ten's Divisions Stack Up

The Big Ten Division Creator, a very cool app created by TheoryNine, allows you to split up the Big Ten into two divisions and see how your alignment stacks up based on three criteria: competitiveness, rivalries and geography. You basically get graded on each of the three factors, which are weighted based on importance, with competitiveness being the most important, rivalries being the second-most important and geography being the least important criterion.

Using the divisions reported to be in place for the Big Ten, here is how the Division Creator grades them: 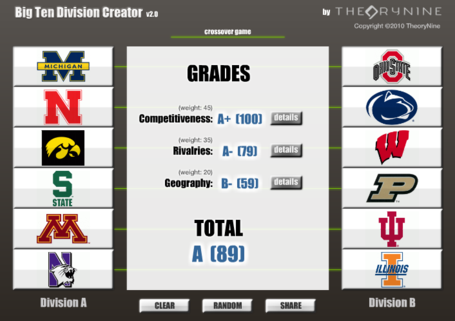 It should come as no surprise that this setup gets a perfect score for competitiveness. From the very beginning of this process, Jim Delany made it clear that competitiveness was the most important aspect, and that is obvious based on the grade of 100.

As for rivalries, that criterion received a decent score because of the protected crossover games that the Big Ten is expected to have. While many rivals are going to be separated by this setup, the crossover game at least allows them to be played in the future.

Geography got the worst score of the three, which was expected given the setup. Rather than just go with an East-West alignment, which would have split the teams up perfectly, the Big Ten threw out geography and went off competitiveness as the main factor in determining the two divisions.