Olympic Size Rink To Be Used For The Big Chill At The Big House?

Share All sharing options for: Olympic Size Rink To Be Used For The Big Chill At The Big House?

The Big Chill at the Big House, a hockey game between Michigan and Michigan State at Michigan Stadium, is less than three months away. On Dec. 11, the Wolverines and Spartans will square off in front of what should be a record crowd of more than 100,000 people.

College hockey season begins next week, so the buzz about The Big Chill will start to get going again as more specifics are announced about the plans for this game. Until then, here is an interesting tidbit Red Berenson released last week:

"It's going to be a Hallmark game, a game of a lifetime," Berenson said. "The plan is to have an Olympic size rink and that adds another twist to it. It's in the Big House so let's give them some room to play."

An Olympic size rink is 15 feet wider than a standard NHL/college rink, meaning players will have a lot more room to work with, which should favor Michigan's speediness. Here is a graphic comparing the two different sized rinks from the LA Times: 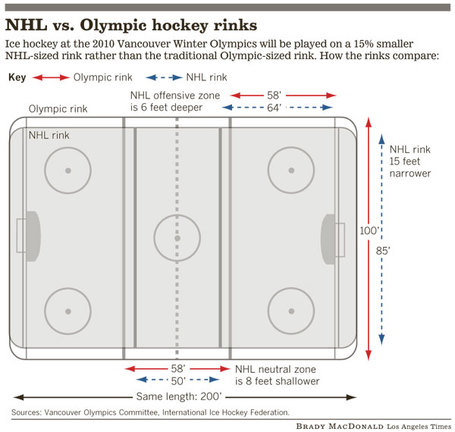 The Big Chill At The Big House: Final Attendance Of 104,073 Is Announced