Eminem And Jay-Z Rock Detroit; Will Do It Again Tonight

Share All sharing options for: Eminem And Jay-Z Rock Detroit; Will Do It Again Tonight

Eminem returned to the stage in Detroit last night in front of 40,000 strong at Comerica Park, headlining one of the biggest hip-hop concerts in history. Jay-Z opened for the 37-year-old native of Detroit.

Via The Detroit News:

Em took the stage to a dramatic intro video that laid out the back story that lead into the concerts: The years of inactivity that followed his last Comerica Park concert in 2005, and his subsequent trip to rehab for drug abuse. When he appeared on stage, wearing a ball cap and a hoodie with a large Olde English D, he tore into the "Recovery" track "Won't Back Down" like it was a fresh piece of meat.

By every account, the concert knocked the socks off of people from all over the world. Notable attendees included Lions DT Ndamukong Suh, Pistons F Charlie Villanueva and my good friend Andrew.  Suh and Villanueva were both tweeting all night about how awesome the atmosphere was. Suh even tweeted a picture of him and Jay-Z hanging out backstage before Em went on (which can be seen after the jump).

Detroit gets a bad rep, but it's positive events like these that will keep visitors and athletes from around the world coming back. As Eminem once said, without a couple choice words: "Detroit 'til we die." 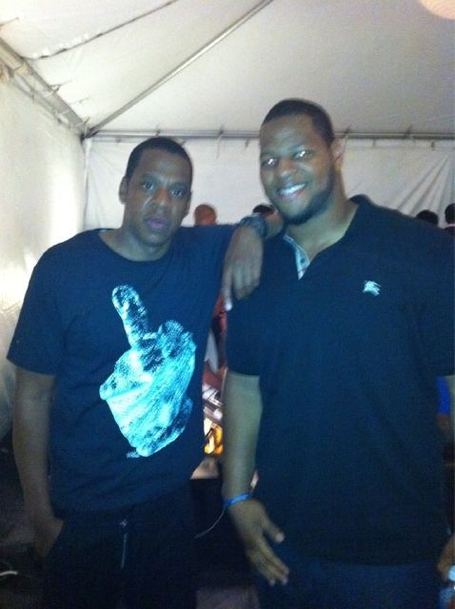