Share All sharing options for: Week 6 NFL Picks: Throwing Wieners At You

After I realized I went 10-3 last week and into the top 25 of Hot Clicks' Pool Tracker picks league, I thought to myself, "I have to do something courageous and epic for next week's picks. I have to embed the workout montage from the Hundred Dollar Baby episode of 'It's Always Sunny in Philadelphia,' Season 2."

Now, I have to make this week's picks because I'm going to see 'Drive' and then I'm probably going to sue somebody.

The Falcons rolled over against the Packers last week after going up 14-0 and the Panthers remained undefeated against the spread to spite me. Of course the Falcons win and cover.

Okay, obviously I don't want this to happen, nor is this a concession that I think the Lions will lose, but I'm nervous about the MNF hangover effect making this one closer than Joe Flacco's eyebrows.

I just don't think this is a good week for the NFL's 5-0 teams to cover. That's all.

I'm really reveling in the demise of the 'Dream Team' but the Redskins aren't a 4-1 team and the Eagles, as much as I want them to be, aren't a 1-5 team. I'm siding with science on this one.

Nobody circles the wagons quite like the Giants this week, right Boomer?

Ralphiesbooger threw five touchdowns last weekend and the Jags have to be kind of wondering what their season would be like if they still had Mark Brunell David Garrard at quarterback.

Still no Andre Johnson and Mario Williams is lost for the season, so that should scream That's So Raven, especially after a tough loss to Oakland at home and playing a team fresh off their bye. I'm not falling for that trap, though.

Raiders picked up an emotional cover/win last week in Houston for Al Davis. Baby, you better believe there will be enough carry over into this week's game against the troubled Browns in front of The Black Hole.

This is Tony Romo's Super Bowl. Covering this spread, that is.

If it's true Blount has a torn MCL, my confidence in this pick is not all there, but I'll stick with it anyway. 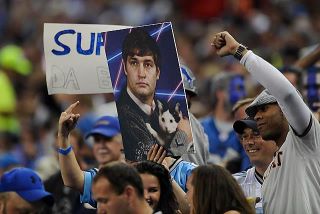 If Brandon Marshall actually gets ejected a quarter and a half into this game, despite being in beast monster mode up to that point, I'd like to amend this pick.