Share All sharing options for: Cris Carter Underestimates The Talent Of Calvin Johnson

What the heck does a guy like Cris Carter know about wide receivers!? Okay, he knows a lot because he's one of the best to ever play the position, but, man, it seems like he's really missing something when it comes to his assessment of Lions' WR Calvin Johnson. Carter was on "Mike and Mike In the Morning" Friday and gave his top six receivers in the NFL followed by his reasoning why C. Johnson isn't amongst the best in the game [via ESPN]:

Eh, Carter is certainly entitled to his opinion, but he's probably not right (FWIW: I've seen Megatron ranked Top 3 on several fantasy football rankings and was told today by an award winning fantasy football expert to keep Calvin Johnson over Andre Johnson this year). Whether or not Carter's right there, he's definitely not right when he said:

We're trying to determine greatness and impact on the NFL game. Calvin Johnson, you don't have to double-team him to take him out of the game.

But I'll defer to The Killer at MLIVE for more on this, since he had the same reaction to Carter's comments and put up something earlier today with far more substance than I could on it:

There were two games last year when Calvin Johnson was held to one catch - a 13-yarder against the Jets and a 44-yarder against the Packers. In that Green Bay game, the Packers had Charles Woodson stuck to Johnson underneath and always - always - had help over the top. Woodson is going to be a Hall of Famer and deserves a lot of credit for the job he did on Johnson but he certainly didn't do it alone.

In the Jets game, New York cornerback Darrelle Revis played a lot of one-on-one against Johnson (like he does against every receiver in the league - including the Cris Carter Six). Johnson beat Revis on a 13-yard slant in the first three minutes and then didn't catch another pass.

I went back to my notes from the breakdown of that film. Remember that crucial rollout/incomplete pass by Drew Stanton that was such a key play in the game in the fourth quarter? Here's what I said about it then: "On that third down, the Jets put eight in the box and doubled Calvin Johnson on the outside - apparently the Jets don't have THAT much faith in Revis Island.

Calvin Johnson tonight in the first preseason game? One possession, two receptions, 37 yards, and a touchdown. The touchdown was a difficult catch that Johnson made look easy and -- would you look at that, Cris -- there were two Bengals hovering Johnson. 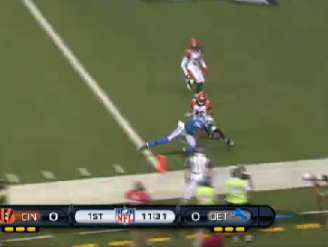 UPDATE: Cris Carter has backtracked on his Calvin Johnson critique: "[H]e’s right there with the top five.  I may have given Reggie Wayne a gift."