The Detroit Tigers are headed back to the MLB playoffs, clinching the 2012 AL Central championship for the second straight season. Here is a rundown of some of my emotions and favorite internet things during celebration.

If you buy something from an SB Nation link, Vox Media may earn a commission. See our ethics statement.

For the second straight season, the Detroit Tigers are headed to the postseason as American League Central Division Champions.

Playoffs? Playoffs! The playoffs will never get old and unworthy of celebrating when it comes to the Tigers. (After all, I'm still rinsing 2003.)

Sure, as a Red Wings fan who knows what it's like to cheer on a team that goes to the playoffs so-many years in a row, it can easily be taken for granted.

Maybe you can get a different response from a 90s Braves fan, but not with our baseball team, though.

In an 162-game roller coaster season of madness, there's a reason why every playoff clinching spot in baseball -- even the playoff play-in games -- are celebrated like a championship. Part of it is tradition, but the majority of it is that it's a long, grueling season, and even longer when this year's version of Jose Valverde is your closer. It deserves a little bit of the bubbly and red, stinging eyes.

As fans who watch the team night in and night out, despite some of the frustrations, we owe it to ourselves to celebrate, too. As the Tigers embraced on the field Monday night in Kansas City, I happily horripilated and soaked it all up. Let's relive the fruits a little bit here. Your 2012 Detroit Tigers -- AL Central Division Champs. Get'ya one of these: 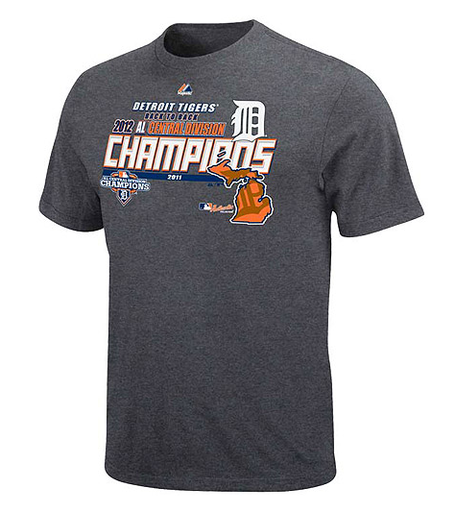 After the "mob scene" around the pitcher's mound on Monday night, Miguel Cabrera was one of the first Tigers to greet skipper Jim Leyland. Together, they shared one of the finer, tender moments you'll ever see between two grown men in baseball uniforms [via]: 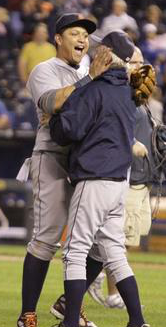 Cabrera was then interviewed by FSD and I think someone gave him the schmedium of the afore-embedded t-shirt: 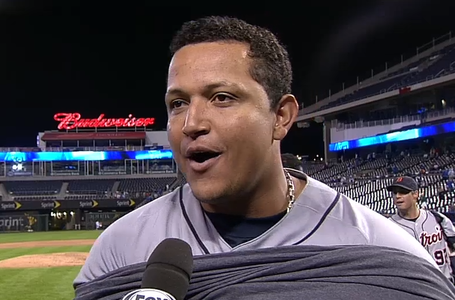 From there, it was off to the clubby to retrieve the swimming goggles and pop the (non-alcoholic) bottles. Alex Avila was well prepared [via]: 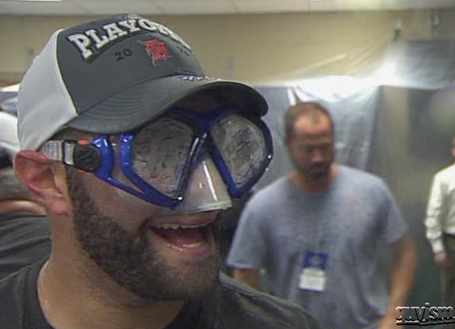 Stogies were burning wild. A Keating says what? [via]:

Darin Downs managed to get most of the team together for a photo op and a twitpic: 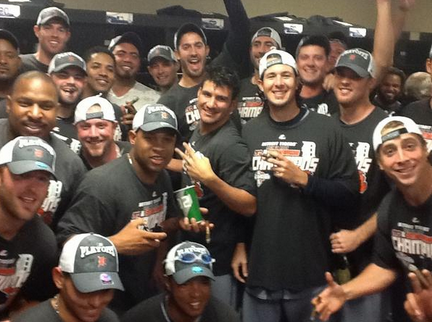 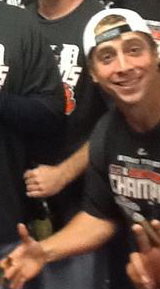 Meanwhile, Jim Leyland was found in his office smoking his last cigarette and crying for the second straight season after thanking the fans of Detroit, hits and rah-rah guys be damned:

Want(ed) Leyland fired? Leyland is only the second Tigers skipper to manage the team to the playoffs three times. Hughie Jennings, not Sparky Anderson, is the other (1907-1909).

Let Octavio Dotel's excellent form in celebration carry us into the playoffs. We should all be so dainty and graceful [via]: 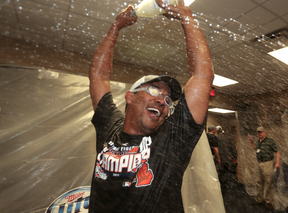