The quarterfinals of the 2012 Big Ten tournament took place on Friday and surprisingly produced no upsets. There was only one upset in the four games that took place on Thursday (No. 10 Minnesota over No. 7 Northwestern), so in that sense things have been relatively uneventful so far. There have been some exciting games, though.

The way Friday got started was not exciting at all. I say that because the first game of the day was completely one-sided. Michigan State blew out Iowa by a score of 92-75 in a game that was never really close. Just like the first meeting of the season between the Spartans and Hawkeyes, Iowa tried to turn the game into a track meet and saw its plan backfire pretty quickly.

The second game provided some fireworks as Wisconsin took down Indiana 79-71. The Badgers shockingly got 30 points from Rob Wilson off the bench to help them win the game. Before Friday, he had a career high of only 13 points and was averaging only three points a game. He stepped up on the big stage and was a big part of Wisconsin advancing to the semifinals.

In the second session of the day, Minnesota went to another overtime game. Their upset of Northwestern came in overtime, and it looked like the Golden Gophers were going to pull off an upset against Michigan. They led by six points with only a minute and a half left, but Michigan came back with a pair of threes to tie things up. In overtime, the Wolverines continued to shoot the ball well and went on to win 73-69.

The final game of the day was close for one half. Ohio State led by only four points at halftime, but in the second half the Buckeyes turned the game into a blowout. They went on to beat Purdue by a score of 88-71 to advance to the semifinals to play Michigan. This is the third straight year that Michigan and Ohio State have matched up against each other in Indianapolis. 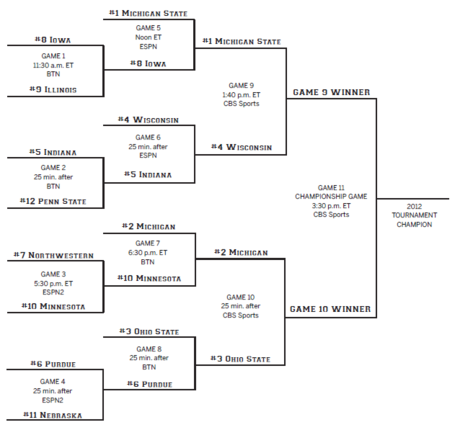