The 2012 Big Ten tournament is almost complete. Only the championship game remains following the two semifinals that took place on Saturday afternoon in Indianapolis.

The first semifinal of the day was between Michigan State and Wisconsin. For the first eight or so minutes of the game, Wisconsin was rolling. The Badgers started the game on a 9-0 run and were clearly outplaying Michigan State.

The problem for Wisconsin is that once that run came to an end, Michigan State took over the game and never looked back. The Spartans closed out the first half on a 26-5 run, and although Wisconsin got within six in the second half, Michigan State's Draymond Green closed the door on a possible comeback by jumpstarting another run for his team. In the end, the Spartans won by a score of 65-52 to advance to their first Big Ten tournament title game since 2000.

The second semifinal of the day matched up Michigan and Ohio State. The Wolverines did beat the Buckeyes back in February at Crisler Center, but Michigan didn't stand a chance on Saturday. Jared Sullinger couldn't be stopped, and Michigan couldn't shoot the ball to save its life. Slowly but surely, the Buckeyes pulled away, and they eventually turned the game into a blowout. The final score was 77-55 in Ohio State's favor. 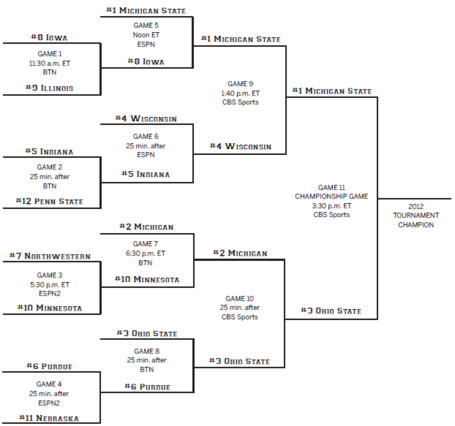