The first day of the 2012 Big Ten tournament is in the books. Four games were played, setting up the four games on Friday in the quarterfinal round.

Day one of the tournament began with the probable end of Bruce Weber's tenure at Illinois. The Fighting Illini nearly came back at the very end of their game against Iowa, but the Hawkeyes held on for a 64-61 victory. Iowa will now take on Michigan State in the quarterfinals.

The action continued with Indiana blowing out Penn State. The Hoosiers are a popular pick to win the Big Ten tournament, and their 75-58 win over the Nittany Lions only reinforced the idea that they can go the distance. Then again, they did lose Verdell Jones III to what looked to be a serious knee injury, so they will have to overcome that on Friday against Wisconsin.

In the first game of the night session, Northwestern saw its NCAA tournament hopes likely bite the dust yet again. The Wildcats really just needed to beat Minnesota and it seemed like they would be in position to make the Big Dance for the first time in their history. That did not happen, though. The Golden Gophers pulled off the upset with a 75-68 win in overtime, likely sending Northwestern back to the NIT. Minnesota, meanwhile, is in the quarterfinals and will play Michigan on Friday.

The final game of the first day was a snoozer. Purdue cruised to a 79-61 win over Nebraska thanks to 17 points from Anthony Johnson, 16 from Terone Johnson, 15 from Ryne Smith, 10 from D.J. Byrd and 10 from Robbie Hummel. The balanced attack led the Boilermakers to the win and to the next round, where they will face Ohio State.

Here's a look at the updated Big Ten tournament bracket (via UM Hoops): 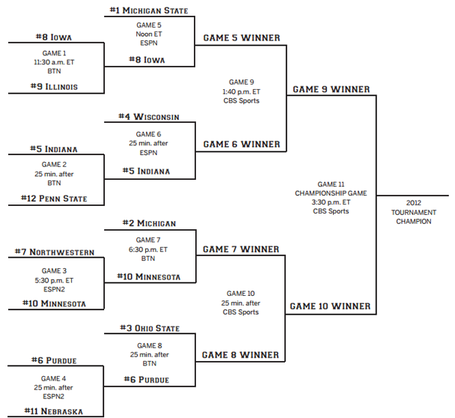