In easily one of the worst conceivable situations for fans of racing in the city of Detroit, Sunday's long-awaited 2012 Belle Isle Grand Prix has been put under a red flag due to extreme track conditions.

After a handful of drivers smacked the wall due to apparently getting bits of the track caught in their cars coming around certain turns, the ABC telecast caught a number of pit members attempting to pry away loose pieces of road while the race remained under a yellow caution. The shots of the track caught by broadcast cameras were, in a word, horrific. 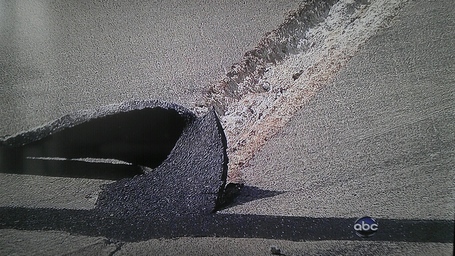 In addition to the track coming apart, pieces of asphalt have also begun to fly into the stands, offering fans in attendance one of the oddest, most unique types of racing souvenirs imaginable. With officials working tirelessly to repair the track into a workable racing condition, it remains unclear when the race will resume, if at all.

For more on the 2012 Detroit Grand Prix, stay with SB Nation Detroit's StoryStream.