Football is back! Back again. Here are my 2012 Week 1 picks against the spread with teasers!

It was as if the NFL never slept for an offseason. The Peyton Manning free agency. The Saints' bounty scandal. The NFL Draft. All of the Lions brushed as criminals because a handful got arrested (twice). Free agency. Trades. Throughout the offseason, it seemed like the NFL was always trending on Twitter. Roger Goodell's master plan coming to fruition, I guess. Then the preseason started -- with replacement officials.

And now, here we are. Week 1 of the 2012 NFL season begins tonight at 8:30 p.m. -- with replacement officials. Maybe it was the lockout last year, or maybe it was all the hot messy action, but it certainly feels like I watched a Detroit commercial in the Super Bowl just last night and wrote about how awesome it was on Facebook immediately after.

I'm not complaining, of course. For others, it was the longest offseason ever. However long it felt for you, the season is here and we're in a safe place now. This is where the healing begins. Prepare yourself for a season's worth of bone-shattering hits, fangasms, soul-crushing defeats, more fangasms, and beer -- lots of beer. I absolutely cannot wait to whip out my Corey Schlesinger jersey on Sunday and head to my favorite bar to partake!

The NFL season also means I pick the games against the spread. This will be my sixth season doing so (I was 136-119 last year), and I will be adding a new wrinkle by teasing four games each week. Under teaser league rules, I get 14 points to add to the spread on either side and that's essentially the new spread for the game. I have to get all four picks right to "win." If I push or lose one, I "lose." I will be using MGM Vegas spreads, which lock whenever I decide to type this out. If you're interested in going up against me, type your picks in the comments and I'll keep a standings at the end of the post each week.

The Colts' #SuckForLuck campaign worked to perfection last year, so they will enter election season as a fortunately quarterbacked team. Of course, a rookie quarterback means growing pains and a little patience for their adopted child to blossom into a star. (See what I did there? Oh, I shouldn't have to ask?)

Despite what else the internet might think of Luck, he does look good and should lead the Colts to plenty of wins.

The winning won't start in Week 1, though. The Bears home opener is the beginning of a season that many punk pundits believe ends with the Bears in the playoffs. On principle, I think the Bears are overrated, but this season might be special for them due to the addition of Brandon Marshall.

Marshall is Jay Cutler's favorite connection that makes Kristin Cavallari rightfully jealous and finally gives opponents a wide receiver to fear after surviving the punt. Marshall will not only make Cavallari and opponents sweat; he will also make Matt Forte better and open things for rookie wideout Alshon Jeffery. The more I think about it, the Bears could be scary good, like Lennie Luck could be down the road for the Colts.

Chris Johnson says he's faster than Usain Bolt -- again -- and he may still have getting-away-from-the-cops speed, but his feet will have trouble keeping up to the Patriots' uptempo scoring attack. New England added Brandon Lloyd to their arsenal this year and they may even have a decent running game with Stevan Ridley. Meanwhile, Tom Brady's still as handsome as ever and trained this offseason by impregnating his wife and playing air-football in an airport in UGGs and a snazzy sweater that probably never snags.

Besides Johnson, there's not much to be excited about with the Titans, unless you feel good knowing Matt Hasselbeck might save Jake Locker's life.

Micheal Vick walks into a Dawg Pound ... Michael Vick gets hurt? Has Dane Cook used this joke before? Has someone on the internet disparaged Dane Cook lately?

If it's anything like the preseason, of which Vick survived 12 snaps, it could be another weird season for the Eagles. AccuScore projects the Eagles to finish 11-5 and PredictionMachine.com says they rock the NFL's best roster, but my nuts dot com say they're overrated.

Everything's contingent on Vick doing something he's only done once in his career,* and I'm not talking about prison football. If it weren't for Stafford's potential braj-in-law, the Eagles' top end zone dancer (01:27:00), I'd probably hate this team like I hate Comcast's customer service. I mean, they partnered with Angry Birds; need I say more?

Having said all that, the Eagles will probably beat the Browns by more than eight points in Week 1 because the Browns are doo-doo, and are going to have a limited -- at best -- Trent Richardson and will be relying on this old man-rookie as their quarterback: 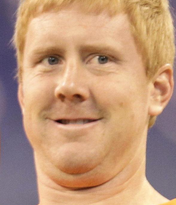 *Every year, I get more and more tired of reading "if [STAR] can stay healthy," like it's not supposed to be implied in the sport full of wrong-way leg injuries and damaged brains. Without fail, though, it will continue to be apart of all NFL previews and I catch myself saying it a few times here. What a hypocrite I am.

There wasn't an NFL team that went through more this past offseason than the New Orleans Saints. Head coach Sean Payton is out serving a season-long suspension and assistant Joe Vitt will miss the first six games. Will Smith, Jonathan Vilma and Mickey Loomis are also suspended. Bounties can be a real bummer, but the Saints attack will march on as long as Drew Brees doesn't get what might be coming around.

The Redskins pin their hopes on stylish rookie RGIII whose socks are an upgrade over Rex Grossman. Mike Shannahan has a better feel for tanning beds than his running backs, but the offensive line is underrated and they have depth. If the Redskins are going to shock the Saints in Week 1, RGIII will need to be as good as Josh Morgan thinks he is.

If the Vikings cared at all about their franchise, they wouldn't let Adrian Peterson step on the field in Week 1. The Jaguars will probably make Tobias Gerhart look a lot like Peterson and they're countering with their back up running back and Blaine Gabbert.

That said, the Vikings aren't very good, either. Their defensive backs are capable of making Gabbert look ... capable, and Christian Ponder is no Fran Tarkenton. This game is the ugliest on the schedule in Week 1 and, if it weren't for Justin Blackmon piquing my interest, I wouldn't dare look at the box score afterward for fear of my eyes burning out of their sockets. I will wear protective sunglass goggles instead.

For the last five years, the Texans have been my favorite team to take the NFL by storm and each year, punctuated by their 6-10 finish in 2010, I've been kind of embarrassed. They reversed that record last year, but injuries to Matt Schaub and Andre Johnson prevented them from being any real threat in the playoffs beyond the Bungles.

Johnson's a year older, Schaub's hairline's still receding and one of the NFL's best defenses lost two of its better players. Arian Foster makes this offense go and I expect him to make it go quite well against Miami, whose best highlights this season can be seen on HBO On Demand.

My Lions forecast can be read at Kissing Suzy Kolber. Stafford-to-Megatron makes the engine purr and whatnot.

AccuScore projects the Rams to be the 2008 Lions -- yes, 0-16. I don't think that will actually happen, but I'd be dipped in Rams kool-aid if I didn't think they'll start at least 0-1 by the way of a serious whooping here. Maybe that's just the Lions kool-aid typing, though.

Playing at Arrowhead is not the most generous match up the Falcons could've landed in Week 1. In addition to the rowdy scene, KC has to feel pretty good coming off a seven-win season despite losing three of its better players by Week 2 last year and having added a couple marquee free agents during the offseason. Plus, Jamaal Charles is on my fantasy team.

The Falcons like to throw 60 times a game and why not when you have Roddy White, Julio Jones and the ageless Tony Gonzalez. Michael Turner has doubters to prove wrong and Jacquizz Rodgers has way too cool of a name to not be an impact against a shoddy KC defensive line.

People project the Falcons to take a step back this year, but I still see them winning 10 games, including this one. Maybe that playoff turd they dropped against the Giants last year is lingering and affecting the senses.

This should be the game of the week. The Niners were a game away from the Super Bowl and they added Randy Moss this offseason! Oh, Moss isn't that big of a deal? Well, still, the Niners are going to be good again even with their fanbase wishing their quarterback was more like Joe Montana and less like Alex Smith.

The Packers are supposed to be world beaters again this season and it makes dinners with my in-laws (Packers fans) awkward and clammy. Aaron Rodgers is so perfect and funny, and Clay Matthews is soooo attractive with his long, girly hair. Donald Driver's such a good dancer... and they're good at football!

I just barfed. Can we talk about something else?

And again. The Seahawks have a failed minor league baseball player quarterbacking their team and Braylon Edwards is one of their wide receivers. Sidney Rice hasn't caught a pass since Week 11 of last year and now Marshawn Lynch has back spasms. Somehow Pete Carroll has managed to make this team into a favorite to make the playoffs, though. Winforever.

The Cardinals QB situation is not much better, but Larry Fitzgerald can basically throw to himself like an older brother dominating his little brothers in backyard football. Also, Jay Feely.

Ray Rice says he's Pro Kindness, but is he going to do anything when the Ravens' defense bullies redhead QB Andy Dalton? That's what I thought!

Torrey Smith is expected to be a breakout wide receiver this year, which will only make Joey Harrington Flacco look better. The aging defense, which will be without Terrell Suggs until November, might not be as good as years past, but the offense should be able to compensate by stepping up.

My gut feeling is the Cowboys win, which makes 18 points a pretty easy tease. It almost feels sleazy, but that might just be because it kind of rhymes. NY humped Dallas in Week 17 last year and only won by 17, which would still count as a cover here. I feel pretty confident in this pick; I mean, when was the last time Tony Romo and Dez Bryant disappointed?

Another 'dog this week that I think is going to win made easy by the extra 14 points. The only thing going for the Jets is that they have Tebow on their side. But the Bills have a healthy Fred Jackson back and Steve Johnson doesn't mind staying on Revis Island. Hook 'em up, Berm.

Admittedly, I'm playing these last two because I wanted to have something on the line for the Sunday Night and Monday Night games. My picks are who I think will win, but if I'm wrong, the games should be close enough to spare me a cover. Who will have a better comeback season -- Peyton Manning or Philip Rivers? The fact that Peyton will take a snap might give him the win, but I think it could be close.

Enough of my picks and banter -- what do you think? Leave your picks in the comments and I'll keep track of them throughout the season.