TiqIQ's Jesse Lawrence explains why tickets in Detroit have never been in more demand than they are right now.

Tonight's Monday Night Football matchup between the Detroit Lions and Chicago Bears kicks off one of the more anticipated, and expensive weeks, in recent Detroit sports history.Not surprisingly, Monday's Lions' game is the most expensive game at Ford Field all season, and likely the most expensive game in the last decade. Unlike most games, where prices drop as the event gets closer, prices for this game have gone nowhere but up. If you're interested in a last-minute deal, there are still 71 eTickets available, starting at $200. If Monday's game is too rich, however, next week's game vs. the 49ers starts at $80, for what is shaping up to be a battle division leaders. .

As for the Detroit Tigers' upcoming ALCS action, Game 5 is the most expensive of the lot, but there are still very affordable seats left for all three games. As of this writing, $62 gets you a no-fee eTicket in section 343 on the third-base line to Game 5.

Last but not least, the Detroit Red Wings are also in action Thursday night against the Western Conference champs Vancouver Canucks. Because there is so much going on that week, demand is a little lower than normal. As a result, you can get in for under $25. TiqIQ also has a make an offer feature for this game that allows you to name your own price. Right now, sellers for three star deals located in 200 Center, which have a list price of $77, are listening to offers in the $35-$40 range. Click here to make an offer for the Wings game: http://tiqiq.us/416

To see all of next week's options, click here: http://tiqiq.us/3~o 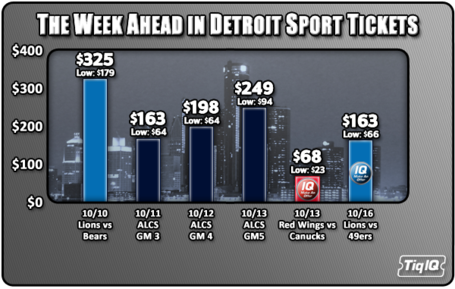