Week 11 NFL Picks: The Gloves Are Coming Off

Still in the top 25-percent of my pick'em league, but falling fast. I'm not blaming these windy blogging conditions, though.

Share All sharing options for: Week 11 NFL Picks: The Gloves Are Coming Off

It's not always smooth sailing. The Lions experienced their first real stinker of the season and, well, my picks have been stinking for weeks. But here's plenty of time to turn things around. I'm no longer wearing gloves when I type and there's always Tim Tebow to turn to, too.

Except I didn't turn to him. I think 99-percent of the world had the Jets rebounding from their awful loss to the Patriots last Sunday night, but it was Tim Tebowwwwwwner who willlled his team to victory and a Broncos cover. Good start to the week. Thanks a lot, Tebow.

Browns played pretty poorly against the Rams last week, but I thought the Jags were worse vs. the winless Colts. I think the Browns can win by at least two here.

Cam Newton and the cover monsters come to Detroit to try and catch the Lions while they might be looking forward to Thanksgiving and still bruised from last week's windy slaughterhouse. I think the Lions should win this by a touch.

Packers have been covering this spread all year and I stubbornly refuse to change my tune -- it's just too many points against a decent opponent that needs a win. 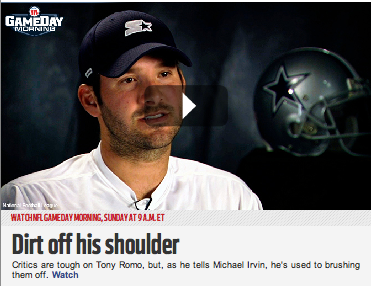 AFC North with the Steelers is on the line and I have no idea who either of these teams are at this point, but I feel like the Bengals are more consistent. I'm going Ravens, though.

That wagon that I talk about getting circled all the time (to poke fun at Boom really) is becoming unhinged.

Vikings are either completely demoralized after being shamed by interconference rival Green Bay on national television or they bounce back by giving the ball to Adrian Peterson on every single play. I think they'll bounce back against a DMC-less Raiders.

49ers can't go 9-1 to start the season, can they? If they do, I don't think it'll be by winning more than nine points.

I'd rather stick a Buzz Lightyear in my rectum than watch this NFC West poop-show.

The wind shouldn't be a problem for Rivers and the Chargers, who bounce back from their recent struggles.

I could see last week's decision in overtime hanging over the Falcons heads for the rest of the season, but I can't pick a Matt Hasselbeck team over this Falcons team in the dome. Dirty birds by a touch.

Way too many points for a nationally televised game, says me last week.