I want to take this time to make something very clear: this has been the funnest Lions team to root for since I can remember. They're freaking talented, they keep me on my toes, and they're 7-5 (despite a lot of injuries to key skill players). I can't ask for anything more from a team that was 0-16 three years ago and 1-11 just 12 months ago. Thank you, Lions; I look forward to the captivating playoff run. 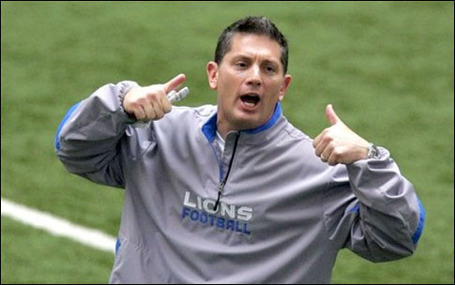 Now, to the picks:

I guess this is the one time I need to prove I'm not lying:

I played this one out on Madden12 on my iPhone. Lions rout and Jared Allen contracts deadly schism from Visanthe Shiancoe's jock strap.

New Orleans needs this after all they've been through in the last few days.

Michael Vick in this pick, Do ... lphins fall back.

I have trouble picking the Falcons to lose two straight, especially since I think they'll be the Lions' fellow wild card holders. But clearly success is getting to Cam Newton and everybody is trying to be superman.

It looks like Josh Johnson, 0-5 as a starter, will be starting at QB for the Bucs. He had to get his shoulder popped back into place to continue playing last week while Josh Freeman recovers from "painful" throwing shoulder. That sounds backwards.

No Cutler? No Forte?

It's the NFC West Champions hang over.

Both of these teams were 4-1 at one point. Now, they're both 5-7. Unless they tie, they can't keep pace through Week 14. Chargers might as well win by a touchdown at home.

I'm torn. Lions play the Raiders in Oakland next week and surely this game will affect how they come out to play. Ultimately, I've decided that if the Packers completely demoralize the Raiders, their second drubbing in as many weeks, there is no way the Raiders  will be mentally stable enough to handle the must-win Lions and a fresh-out-of-the-asylum Ndamukong Suh.