Share All sharing options for: City Of Detroit Frowns On 'Booty Lounge'

Tailgating before Detroit Lions games could now be a bit less fun for a certain segment of fans.

The city of Detroit is currently investigating whether or not a mobile strip club (Wouldn't you have liked to be in the room when that idea was pitched?) can legally be allowed to park and operate their business downtown.

The "Booty Lounge" parks and operates at Eastern Market before Lions home games. (Yeah, that's right — we just linked to their Facebook page, in the interests of the full coverage you've come to expect from SB Nation Detroit.) 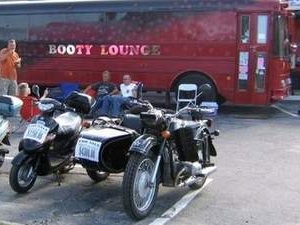 Just don't let a search take more than one hour, officers. If they're on the bus for longer than that, exactly what sort of investigation is being conducted could be called into question.

"Ostensibly, it's an illegal establishment," Godbee said. "The same thing that would regulate that type of activity in a strip club would be applicable to that vehicle. We're going to police it very aggressively through our investigation.

"I'm appalled at this kind of conduct because we have families and children around. We need to make sure these events are fan-friendly for children and their families."

Godbee may also want to investigate why several people who appear to be Detroit police officers have been photographed in promotional images with Booty Lounge performers.

The Lions' next home game is Monday, Oct. 10 against the Chicago Bears. Will the Booty Lounge be shut down by then?