When the Lions drew the Saints last weekend, I was confident that the Lions would hang, but I wasn't ready to put my plums on the Lions winning.

Everyone already knows that the Lions played in their first NBC Sunday Night Football game against these same Saints almost exactly a month ago. What nobody seems to care about is that the Lions fought tooth and (hang)nail despite falling behind early, 17-0. The final score of 31-17 in favor of the home Saints may have been closer than the game felt, but the Lions had a chance to tie the game with the ball and down 24-17 -- backbreaking penalties, missed field goals, offensive pass interferences, and all.

The Lions went on to win three of their next four and the offense is CLICKING to the tune of 141 points in the last four games (35.25 per game).

The Week 13 win for the Saints was their fourth of what would wind up being an eight-game winning streak to finish the season. Yeah, they're hot, too (38.5 points per game in their last four).

Keeping that in mind, the rhetoric i don't understand leading up to tonight's game is that the Lions are going to get blown away (you know, in that Brees-y dome), like they don't have two of the most lethal weapons in football. Like they're the 2008 Lions, not a 10-6 team about to play in a playoff game. Like allowing Matt Flynn to throw for a Packers' record million yards (to their best receiver Jordy Nelson) in the last week of the season, one week of 17, means Brees is going to break Dan Marino's record again in one game.

Some experts are suggesting, all the Lions have going for them is the, "weird things usually happen in Round 1 on Saturday night" thing. That's a real knee slapper.

That particular expert (who finished much worse than this guy in picks against the spread this year, I'm just saying), prophetically points to numbers for why the Saints will march and then only points to anomalies and intangibles for why the Lions will stumble, never giving them a chance with, you know, numbers.

Consider this: the Lions defense will have their entire defense healthy and playing this week. That includes Louis Delmas. In the 10 games Louis Delmas played this season, the Lions allowed 210.8 passing yards per game. In the six games he was out (including last week)? The Lions gave up 332.3.

The Saints defense is 30th against the pass. The Lions are 22nd. If the Lions defense stays healthy, I take their 11 over the Saints, which finished slightly above New Orleans, despite having several injuries (and one pretty big suspension) this season.

Yeah, the Saints are the easy, near-consensus pick. They've been putting up such good proverbial video game numbers, it makes my created team almost pale in comparison. But the Lions' offense isn't far behind. With all the hype that's been stroking the Saints' offense, they almost strike me as getting overrated and with how little attention that has been paid to the Lions' offense (especially Matthew Stafford's historical 5,000-yard passing season), they're being grossly underrated.

And that's fine, because for the first time all week I feel like the Lions are going to shock the world. If they can get up early and take the crowd out of it, exorcise the jitters, and put the Saints back against the ropes, this Lions team is going to come away with a win. This is not unchecked homerism. Just wait until you hear those Lions roar, New Orleans -- the Lions are about to be one step closer to the Super Bowl. 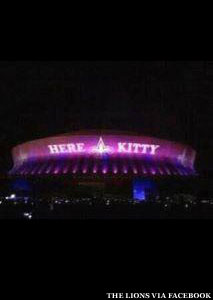 (by the way, I'm going straight up with these picks because it's the playoffs -- win or go home)

This game already started, but I tweeted my pick before the game. It's currently 17-10 Texans following a pick-six.

The Falcons might be my dark horse for the Super Bowl, if they don't have to play the Lions, of course.