The new issue of ESPN The Magazine took an interesting theme for its NBA Preview. Each of the 30 teams received their own cover featuring a Marvel Comics character, someone associated with that particular NBA team and a storyline for the season (many based on previous Marvel story arcs).

For the Detroit Pistons, it's not perhaps the most flattering storyline. (But expectations aren't very high for the upcoming 2010-11 season, either.) General manager Joe Dumars teams up with Doctor Doom to create robotic replicas of Dumars' teammates from the "Bad Boys" championship era, such as Bill Laimbeer and Isiah Thomas.

Here's a look at the cover: 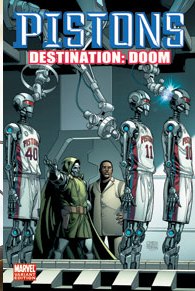 As a comic book fan, I'm not too crazy about Dumars consulting a supervillain for help. (That seems more like something Isiah would do.) Couldn't he have worked with someone like Tony Stark (Iron Man) or the Fantastic Four's Reed Richards (Dr. Doom's arch-enemy)?

Okay, maybe it's getting a little nerdy in here.

(Dumars himself likely isn't too thrilled with his portly depiction, either. We can all see that Joe D isn't as svelte as he was in his playing days, but is he as big as artist Sean Chen portayed him for this cover?)

If you're an ESPN Insider, you can click here to check out each of the 30 covers at ESPN.com. Or you can head over to a newsstand to pick up the latest edition of the magazine.