Shawn Hunwick's unbelievable story got even more unbelievable on Wednesday when he was signed to an amateur tryout contract by the Columbus Blue Jackets. In need of a backup goalie after Steve Mason suffered an injury in practice, the Blue Jackets decided to sign Hunwick, who just finished his career at Michigan last week. He drove down to Columbus from Ann Arbor, and everything happened so fast that he is dressing on Wednesday night in Columbus against the Detroit Red Wings in his Michigan gear. The result is seeing a player for a Columbus team with a maize and blue winged helmet. Check it out: 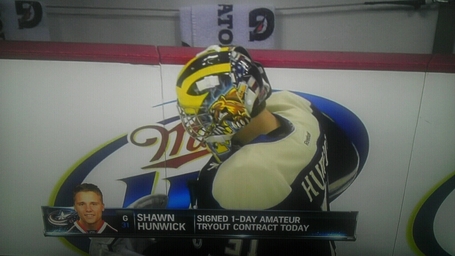 Considering he came to Michigan as a walk-on, it's surprising enough that Hunwick even saw the ice for a significant amount of time in college, let alone became the starter. When you consider he led the Wolverines to the national championship game last year and left as a Hobey Baker finalist this year, it's truly unbelievable. Now add in the fact that he is getting a chance to suit up for an NHL team and this will truly go down as one of the most improbable sports stories in a long, long time.

Red Wings Vs. Blue Jackets: Detroit Loses In Columbus, 4-2, But Maintains No. 4 Seed