C'mon Deadspin, Give Credit Where It's Due

Share All sharing options for: C'mon Deadspin, Give Credit Where It's Due

UPDATE (4:45 p.m.): Deadspin has since edited the post to give Samara her due credit. This guy with a blog thanks them for doing the right thing.

It used to be common courtesy in the blogosphere: If you got information or found something notable from another source, create a hyperlink back to the original site so the author receives proper credit (and page views). Even better, outright mention the original source in the post. (Personally, I try do exactly that in every post I write for SB Nation Detroit.)

Virtually every blog in existence owes its success at some point to internet word-of-mouth, whether it was a link from a site with far more traffic, a listing on a blogroll, or a reference in blog comments or a message board. Even a monster sports blog like Deadspin was once an internet newbie and benefited greatly from links from other sites.

Will Leitch reached out to other sports blogs, sometimes getting a virtual smack in the face, hoping to get mentions from bloggers big and small to drum up interest in Deadspin. And in return, he linked out generously. Many of the sports bloggers you read today (including the one you're reading right now) owe at least some of their success to that relationship.

At the risk of sounding like a curmudgeon grousing about how things were in the old days, that sort of link culture appears to be over. And in the case of a site like Deadspin, I understand. The site has become huge. Posts have to come fast and furiously to keep up those Nick Denton-mandated page views. There just isn't the time to link out (let alone create link posts) anymore.

But if you create something for your site that incorporates more than a bit of someone else's work, proper credit should be given to the site that material was taken from. And Roar of the Tigers (edited by the very talented Samara Pearlstein) was snubbed by Deadspin this week.

If you missed it, David Matthews created a parody video for Deadspin of Ken Burns's The Tenth Inning, which played this week on PBS. (By the way, see what I did right there?) And it was a pretty amusing "outtake," aping that signature Burns style, chronicling the madness of Ugueth Urbina, whom you might remember more for attacking workers with a machete and pouring gasoline on them with the intent of setting them on fire.

As horrifying as the story was, many of us sort of had a laugh about it. Because it was just so crazy. At Roar of the Tigers, Samara drew up a little cartoon mascot of Urbina with machete and gasoline can, enragingly ready to attack. Then she took it around the world with her, like that garden gnome in Amelie, and took pictures of Lil' Ugie in front of landmarks in Seattle and Florence.

If you forward ahead to the 2:15 mark of the parody video, you might see some familiar images. For instance: 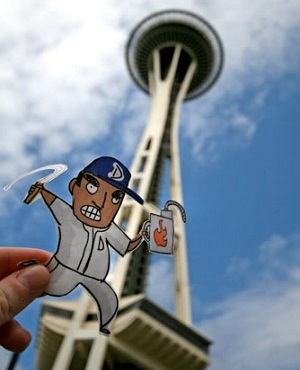 Matthews's narration credits the photos to "some guys with a blog who did this thing," which in itself is sort of a parody of the dismissive lack of credit sports bloggers receive from traditional media who find themselves having to check on a rumor or beaten to a story. So maybe it was kind of a joke.

But Matthews used four of Samara's images, constituting 30 seconds (or one-eighth) of his video. Yet Sam isn't mentioned in the credits, nor is her site. Maybe I'm taking this too seriously, but I think that's wrong.

I don't know exactly how Sam feels about this. Maybe she's excited that her work was featured on a popular site and in a funny video. Maybe she's miffed at the lack of credit. (She seemed bemused in comments on Facebook.) Sam didn't ask me to write this post, and maybe she prefers that I didn't. But I think Deadspin is better than this. Or at least they should be.

Thanks to Rogo of DesigNate Robertson who brought this to attention on Facebook earlier in the week. If you're a Tigers fan, check out his blog, along with Sam's.