Want To See What Derek Jeter Looks Like In A Tigers Uniform?

Share All sharing options for: Want To See What Derek Jeter Looks Like In A Tigers Uniform?

Or any other uniform besides the Yankees for that matter? The Beckett Blog has photoshopped Derek Jeter into the 29 uniforms he's never donned before to give us a visual of him wearing another one in 2011 if the Yankees decide not to bow down to their longtime shortstop's salary demands. [H/T Big League Stew]

The chances Jeter winds up in a uniform besides the Yankees' next season, when he'll likely become the 28th member of the 3,000th hit club, are slim, in my opinion. Considering the Tigers re-signed Jhonny Peralta to a two-year deal to play shortstop, there's probably a better possibility of Bobby Higginson receiving enough votes to remain on the Hall of Fame ballot next year than Jeter winding up in a Tigers' uniform. (Eh, I guess the odds of both are equally close to zero).

Having said that, Jeter looks pretty good rockin' the Old English D, even if he slightly resembles a bobble head doll. Take a look after the jump. 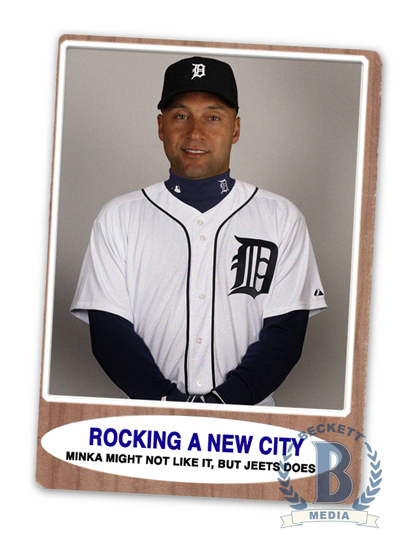