Share All sharing options for: Tigers Vs. Rangers: Rain Delays Start Of Game 4

UPDATE: The Tigers have announced a 6:30 p.m. ET start time for the ballgame.

Once again, rain has made its presence known during the postseason.

The start of Game 4 of the ALCS between the Detroit Tigers and Texas Rangers at Comerica Park has been delayed due to rain. Play is expected to begin at approximately 5:45 p.m. ET, according to the @MLBonFOX Twitter account.

Judging from the weather map, it looks like this rain system will blow through soon. But that’s from a completely amateur meterological standpoint. 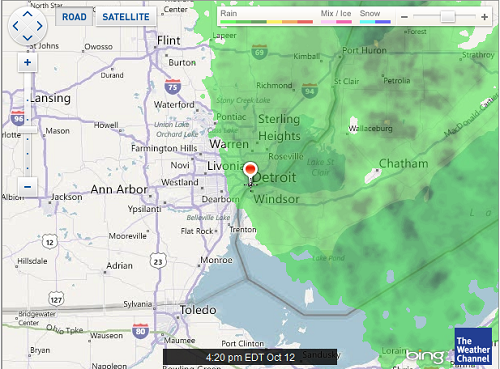 With the originally scheduled 4:19 p.m. ET start, along with another day game scheduled for Thursday (first pitch at 4:19 p.m. ET), this game is almost certainly going to be played. Another postponement doesn’t seem like an option, unless the weather makes it completely necessary.

Look at it this way: If you’re at work when the game was supposed to start, you’ll get to see more of it at home now. Plus, this rain delay won’t prevent Justin Verlander from pitching.