I love me some quality Detroit swag and, according to Steve Kornacki at MLIVE, Brandon Inge was rocking the finest when he entered the clubhouse Friday morning:

Detroit Tigers third baseman Brandon Inge reported to training camp this morning at Marchant Stadium wearing a blue T-shirt with a message silk-screened onto it in orange letters:

Inge is the right guy to be wearing that shirt, too. He is entering his team-high 11th season in Detroit, and is only one of two remaining players from the ever futile 2003 team (Ramon Santiago is the other, although he played in Seattle for two years in between).

Now, it's not exactly the one Kornacki described, but this is the gist of the shirt Inge was wearing this morning.* While that's the "we're stronger than you," model, I like this shirt a friend wore to the Braves/Tigers games this past summer, which embodies the "you want to stereotype, we'll show you stereotypes" model: 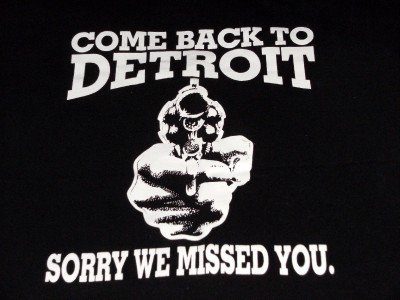 Of course, if anything unexpected should happen to Miguel Cabrera with his legal problems, I'm guessing this shirt could become popular in the D, too.

*That shirt is, however, the one Chris Chelios has been seen wearing.