Weather Update For Game 2 Of Tigers Vs. Red Sox Doubleheader

Share All sharing options for: Weather Update For Game 2 Of Tigers Vs. Red Sox Doubleheader

According to Jason Beck, the tarp is on the field at Comerica Park (with 11 tractors and other grounds crew vehicles holding it down) and the wait is on to see how the inclement weather in the area will play out for tonight's game.

All of Southeast Michigan is under a Tornado Watch until 8 p.m., with several counties under a Warning, and there is a 100-percent chance of rain tonight. Here's an hourly breakdown of the forecasted weather for this evening per Weather.com: 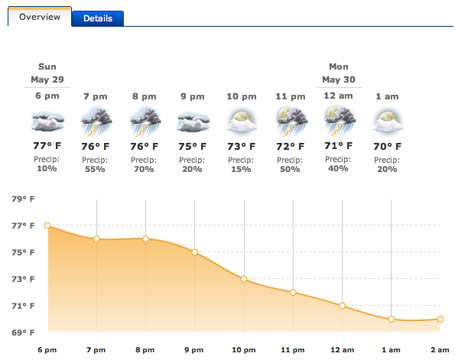 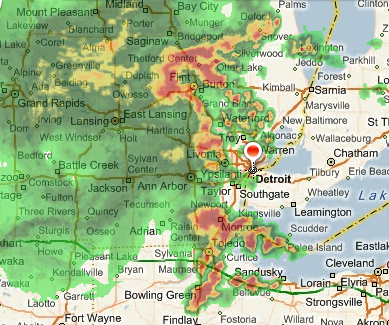 I'm no Chuck Gaidica, but I'd say there's a strong chance this game, originally set to start at 7 p.m., will be delayed. The window for playing appears to be sometime after 8 p.m. and before 11 p.m. With Justin Verlander starting, it's also a lot less likely the Tigers will opt to start the game on time if there's a strong possibility of it being delayed mid-game and potentially losing innings from their ace. Having said that, these two teams don't visit each other again this season (unless it's in the playoffs), so this game needs to happen at some point tonight. If they have to endure a couple of delays, that's just how the cookie will have to crumble. In the meantime, they can wait it out by taking slap shots off of a Tiger in hockey goalie gear.