Share All sharing options for: Brian Wilson And His Beard Took Out Their Frustrations On A Gatorade Jug

The Tigers lost a heartbreaker, but Brian Wilson was the only one who lost his mind on Friday night.

After being summoned in the 8th inning to record a four out save, Wilson blew the save and almost blew it again (well, technically, his win at that point) in the 9th inning before skipper Bruce Bochy went to the pen so someone else could save the game for Wilson.  Brian Wilson proceeded to go all Ghetto Boys on a Gatorade jug in the dugout as Survivor's 'Eye of the Tiger' blared over the Comerica Park PA system (the video is embedded after the jump). After the Gatorade jug stopped talking back, Wilson punched the wall with his pitching hand.

At least one teammate was really broken up about it, like a young child who just witnessed mommy and daddy fighting, (not really, but seriously, I'm not sure why Huff appears to be crying here): 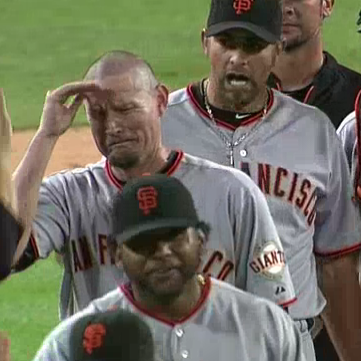 "You give yourself 30 seconds to completely lose it, then come back and be part of the team."