Share All sharing options for: Victor Martinez's Six-Year-Old Son Is Adorable And He'd Really Like It If You Voted For His Dad

As you know, the Tigers could have five representatives in this year's All-Star game if you smartly invest your privilege to vote in Tigers' designated hitter and catcher Victor Martinez, who is one of the five nominated in this year's Final Vote.

You have probably already voted for Martinez a few hundred times, but in case you haven't, this video could entice you to sit on your computer for the next 20-plus hours and submit as many votes as humanly possible, simultaneously roaring, "ZOMG, that video of Victor Martinez's son begging for votes for his Dad was just TOO cute". 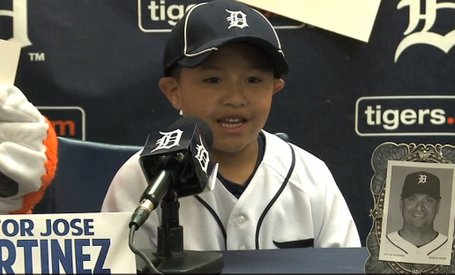 Yes, Victor Jose Martinez, Victor Martinez's six-year-old son, gave a mock press conference with his right-paw man Paws, pleading for fans to vote for his Dad so he, Victor Jose, can go to the All-Star Game and be with his friends, like David Ortiz. How can you say no to that?!? The campaign may not have been via Twitter, but this will likely win everything Verlander has to offer.

Now, if you're someone who would stiff arm a kid for a foul ball, then an opportunity for free tickets to a game is probably more your kind of bait than just some cute little kid saying pweeze:

Cast 100 or more votes for Martinez as the Final American League All-Star and be entered for a chance to win two (2) tickets to a Tigers game at Comerica Park, the opportunity to watch batting practice on the field, and meet Victor Martinez.  See Official Rules for complete details.

Shane Victorino and Paul Konerko are currently in the lead. Ballots close tomorrow at 4 p.m. and, last I checked, it was supposed to be VictorVictorino, not PaulVictorino, baseball fans. Do your civic duty.