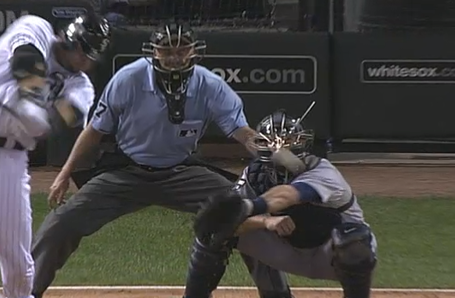 Tigers' catcher Alex Avila has taken a beating this year behind the plate, especially in the last two months. Somehow, he's been able to healthily withstand it while still managing to put up one of the best seasons for a catcher this year. Tuesday night against the White Sox was no different.

In the eighth inning, on an 0-2 count, Avila took an A.J. Pierzynski foul ball off his left forearm. Avila took off his mask, spit, grit his teeth and put his mask back on to call the next pitch. Naturally, Tigers announcers praised his toughness. On the next pitch, Pierzynski fouled another pitch straight back, a direct shot off of Avila's mask. I don't know if you know this, but those foul balls are moving really fast and they hurt.

The result also had everyone quoting their favorite Coldplay lyrics on Twitter:

Yes, those are sparks literally flying off of Avila's catcher's mask -- probably into his eyes --  and my guess is he didn't even blink; Avila re-adjusted his mask and said, 'may I have another?' Nice try in burning down The Alex Avila, A.J. PIerzynski.

(In all seriousness, I think that's the first time I've ever seen sparks fly off of a catcher's mask on a foul tip. Yours?)