Detroit Tigers catcher Alex Avila was on ESPN with Karl Ravech the other day talking about the upcoming season. Shortly before Avila's segment, Ravech teased it by tweeting that Avila would be joining the show and that he has been working out this offseason with Miguel Cabrera, who has lost 25 pounds!

Avila also talked to The Detroit News and didn't call it 25 pounds, but still said Cabrera has lost 20-plus pounds and that he intends on losing at least another 15!

"Since Prince Fielder signed," said Alex Avila, the Tigers' catcher who works out with Cabrera in Florida, "he's thrown himself into being a third baseman. It's all he's thinking about."

Avila spoke about Cabrera's conditioning program on Friday with ESPN, but also over the phone with The Detroit News. Avila said Cabrera has lost 20-plus pounds with the intention of losing "at least 15 more."

"You know, you can make up your mind that you're going to be able to do something," Avila said, "but in this situation, Miguel has thrown himself into doing everything he can to do the best job he can."

Cabrera showed up to camp last year at about 270 pounds and was recently pegged at around 265 (presumably after he started losing weight). The expectation was that he'd be around 250 for Spring Training, as Leyland has been on record as saying that he would not want Cabrera any lighter than that because of fear he'd lose pop in his bat. It sounds like Cabrera may be getting down to his playing weight with the Marlins, though, which was around 240.

Here's a picture of a clearly slimmer Cabrera with Magglio Ordonez at their training facility in Florida: 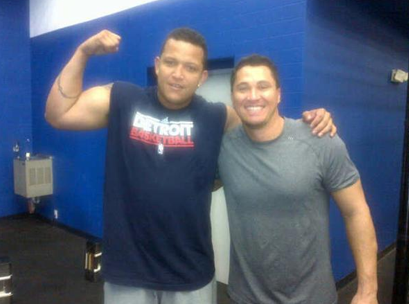