A dossier of Jim Leyland's questionable decisions throughout the 2012 season with adjudication.

If you're a Tigers fan who LOVES to second guess Tigers manager Jim Leyland, then you stumbled across the right place. Overall, I'm a big fan of Leyland, but this feature will serve its purpose in breaking down every questionable managerial decision our chain smoking skipper makes in every game leading up to a Tigers' off day (or some random day in the middle of a lengthy stretch). I won't catch everything or won't think some things are as big of a deal as you might, or I may even mention a Leyland move as questionable when it wasn't at all, so if you have something to add, hit up the comments.

Everything -- including Ryan Raburn -- smells like roses when the team is winning. You usually won't hear any real bickering about Leyland until things go awry, unless you're listening to someone who's completely unfair and just has it out for the old man. Believe it or not, though, I thought Leyland still made some head scratching calls in the Tigers' sweep against Boston:

Jim Leyland's a fan of the sacrifice bunt; Bill James is not.

In the bottom of the 5th inning of a 0-0 game with Justin Verlander dueling Jon Lester, Leyland decided to sacrifice Alex Avila to move the runners up from first and second so Ramon Santiago could have a crack at knocking in a run with less than two outs (or two runs with a hit). Leyland's intentions were pure -- a run or two scores and that should be enough for the reigning Cy Young and MVP + the perfect closer, if necessary. This was the first time in the game Lester allowed a runner on second base and, up to that inning, he looked every bit of nasty as Verlander.

The blatant flaw in Leyland's decision, though? Avila had all of three sacrifice bunts in 2011 and is a lot better hitter than Santiago. I'd take my chances with Avila swinging, save an out and possibly extend the inning to get it back to the meat of the order. Of course, Avila failed to get a bunt down on the first two pitches, falling behind 0-2, and wound up striking out.

You're probably thinking, okay, so bunting didn't work and neither did letting Avila swing. Well, Avila's at bat was completely altered by being put into the mindset of having to get a bunt down; being behind 0-2 didn't do him any favors, either, once he had to revert to swinging. Maybe Avila makes an out anyway... or maybe Avila gets a hit because he doesn't step into the box thinking all he needs to do is sacrifice himself; he's in the mindset all along of hitting with three strikes rather than one.

I didn't like the bunt attempt because, even if Avila got the bunt down, Santiago and Jackson got out, so it wouldn't have worked anyway. That hind sight is true, but assuming Avila gets a bunt down, Santiago's approach completely changes knowing he just needs to put the ball in play on the right side rather than a hit; the pressure alleviates ten fold. That said, I'd still take my chances with Avila, who finished with two hits in the game, swinging away rather than giving him up and relying on Santiago and Jackson.

(I won't go this in depth on every sac bunt henceforth, but since this is the first one, I figured I'd try to explain it more thoroughly.)

This shouldn't have been a controversial move, but it became one when Valverde blew his first save since September 2, 2010 and ruined a gem by Verlander. It didn't help that Valverde was credited with the 'win' after the Tigers walked it off in the bottom half of the ninth.

Questioning the move after the fact is easier when you consider Verlander threw only 105 pitches -- Verlander is usually at 105 pitches by the sixth or seventh inning. He threw the most pitches in baseball last year and seeing him at 120-130 pitches after a start became the norm, so seeing him at 105 after eight in a 2-0 game meant he could conceivably go out for the 9th to finish what he started.

However, it was Opening Day and Valverde had been perfect at slamming the door over his last 54 opportunities (including playoffs). Leyland shouldn't have received any grief over this one and I think fans kept it together for the most part. But imagine if the Tigers didn't win ... still, you go to Valverde there given the circumstances.

One of the biggest complaints with Leyland over the years deals with his at times peculiar lineups. After starting Raburn at DH in the six hole in the Opener against LHP Lester, Raburn was moved to 2B and the No. 9 spot in the order in Game 2 against RHP Josh Beckett. Andy Dirks took over the DH spot and hit No. 8. Santiago was the odd man out after going 0-3 in Game 1.

This is actually right: Avila moves up against the righty Beckett; Raburn, who doesn't hit righties that well, moves down; and Dirks, who was actually a much better hitter in minimal at bats against lefties last year, had faced Beckett before, so I guess he gets the slight nod over Raburn in the order. Santiago gets the hook because he was horrible as a lefty last season and Clete Thomas is 0-6 vs. Beckett in his career, so he's not considered. No reason for any uproar this time, fans, and it appears Leyland's paying fairly close attention to the splits.

When is the right time to pull a starter that clearly doesn't have 'it'? If you pull him too soon, you run the risk of blowing up your bullpen, but if you wait too long, you flirt with giving away games. Sometimes you have to take into consideration the pitcher you're dealing with. Sometimes you have to consider the status of the bullpen -- is it drained? The latter's obviously not a concern in Game 3 of the season (unless you're the Indians and played a 16 inning Opener). Also, in Scherzer's case, he was spotted five runs in the first two innings, so Leyland could reasonably gamble some by giving his No. 3 starter a little more leash.

Even with the early 4-0 advantage, though, Leyland wasn't afraid to get Collin Balester going in the second inning when Scherzer put the first two hitters on, gave up a two-run double, hit Kelly Shoppach, and walked the bases loaded before escaping the frame.

In the third, after the Tigers tacked on another run, Scherzer ran into similar trouble as he did in the second (and as he has in the past against the Red Sox). If Leyland never gets Balester going in the second inning, maybe he gets away with leaving Scherzer in as long as he did. But Leyland showed prescience in getting Balester hot early and didn't pull the trigger when Scherzer clearly did not have 'it', causing many fans to reasonably wonder what took Leyland so long when he finally stepped out of the dugout to go get Scherzer.

In the bottom of the 10th inning, righty Danny Worth pinch hit for lefty Andy Dirks to face the LHP Franklin Morales. Worth singled, so Leyland's move there was a resounding success!

But the move also meant that Leyland would have to do some shuffling in the top of the 11th because Worth, an infielder, pinch hit for the Tigers' left fielder. The switch may have seemed simple enough: Raburn moves to left and Worth takes over at second base, because Raburn is a terrible second baseman.

The problem, of course, is that Raburn is pretty bad with a glove on -- period. I don't care what the advanced stats say, he's shaky at best. Even if you want to argue that Raburn is adequate in the outfield, Clete Thomas is better and he was sitting on the Tigers bench.

So, when Nick Punto hit a bloop into left that dropped in front of Raburn and he kicked it, you should understand the resulting frustration. Now, I'm not sure if Thomas makes the catch, but I'm confident he plays it cleanly off the bounce and he has more than enough arm to get Ross, who is still standing about 89 feet from home plate: 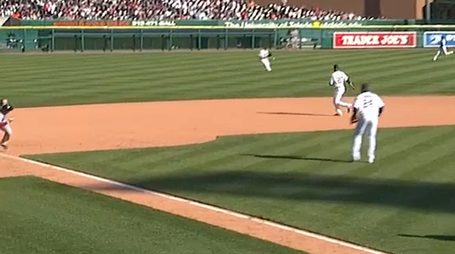 And if Leyland's hanging on to Thomas in case he needs a pinch hitting lefty at some point in extras, he'd still have his boy Kelly and Santiago.

Unless Jim Leyland knew Alex Avila was going to hit a walk off, he arguably should've pinch ran for the lumbering Prince Fielder at first in the bottom of the 11th with two outs and the Tigers down a run. If Avila hit one in the gap, a faster runner -- like Thomas, Kelly, Santiago or anyone -- might score, but Fielder doesn't. There's no top of the 12th and another at bat for Fielder if the Tigers don't score at least that one run. Of course, Billy Zane showed up, so it didn't matter. Leyland's a genius.

If you have anything to add, leave your thoughts in the comments.