Saturday night was quite the roller coaster ride for Michigan State. The Spartans went from trailing 14-0 to Wisconsin, to leading by 14 in the fourth quarter, to blowing the lead and being tied with less than a minute to go. It looked like MSU was going to have to rebound and try to hold off Wisconsin in overtime, but then the Spartans found some of that primetime magic they had last year against Notre Dame.

On the final play of the game, with the ball on the Wisconsin 44-yard line, Kirk Cousins dropped back and threw up a Hail Mary. A Wisconsin player tried to bat the ball down, but he mistimed his jump. As a result, the ball bounced off of an MSU receiver and landed right in the arms of Keith Nichol. He caught the ball at what seemed like the one-inch line, and after a battle between Nichol and Wisconsin defenders, the referees ruled Nichol was down short of the goal line. The play was reviewed, however, and the referees overturned the call and ruled Nichol did break the plane. Translation: Touchdown MSU. Ball game MSU. (Check out video of the Hail Mary here.)

The 37-31 victory for the Spartans means they are now 6-1 overall and 3-0 in the Big Ten. They are in the driver's seat to win the Legends Division, and they could very well see Wisconsin again later this season in Indianapolis. If what happened on Saturday night is any indication, that would be quite the inaugural the Big Ten title game.

Early on, Saturday night's game looked like it was going to be anything but memorable. Wisconsin got out to a quick 14-0 lead and was dominating the Spartans. MSU did a 180 in the second quarter, however, and suddenly it was the Spartans putting the hurt on Wisconsin.

Things started to go downhill for Wisconsin when Russell Wilson was flagged for intentional grounding in the end zone, giving MSU a safety. The Spartans then scored on a 34-yard reverse by Keshawn Martin. Following a blocked field goal, MSU took the lead on a B.J. Cunningham touchdown on fourth down. Then, less than a minute later, a blocked punt was recovered in the end zone for a Michigan State touchdown. At halftime, the Spartans shockingly led by a score of 23-14.

Wisconsin battled back in the third quarter with a field goal to make it a one possession game. The Spartans opened the fourth quarter with a 15-yard touchdown pass to Martin, putting them back up by two scores. MSU looked to have the game in hand, but a 22-yard touchdown run by Wilson made it a game again. After a couple of big defensive stands by Wisconsin, Wilson led the Badgers down the field again, and Montee Ball scored from two yards out to tie the game.

Had Wisconsin coach Bret Bielema simply played for overtime, regulation likely would have ended with a tie score. He decided to try and get the ball back instead, and the plan backfired. After Wisconsin called timeouts to extend the game, Michigan State picked up a first down and made use of the extra time. It allowed the Spartans to move into Wisconsin territory, and it also made the Hail Mary from Cousins to Nichol possible. Bielema appeared to escape the last-second touchdown at first, but this screenshot from CJ Fogler says it all: 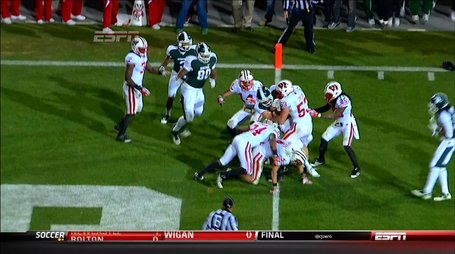 The ball broke the plane just enough for the replay official to rule that Michigan State had scored, and just like that Wisconsin went from thinking it had done enough to at least go to overtime to seeing its perfect season go down in flames.

Obviously, this was an unbelievable game and an even more unbelievable finish. In the larger context of the season, though, this game is about much more than a miracle touchdown on the final play. The win means the Spartans are still the only undefeated team in the Legends Division, and if they can get past Nebraska next week, they could very well cruise to the Big Ten title game. There is still a lot of football to be played, of course, but Michigan State is one win away from escaping a ridiculous October schedule unscathed.