Last week, an image of what appeared to be a camouflage Michigan State basketball jersey leaked out. Nothing was confirmed, but speculation suggested that the jerseys were for the 2011 Carrier Classic, which will feature a game between the Spartans and North Carolina Tar Heels on an aircraft carrier.

Although no official announcement has been made, Michigan State head coach Tom Izzo confirmed this week that the plan is for his team to wear camo jerseys against UNC.

Asked whether they are camouflage, Izzo said: "Supposed to be. I just don't know what they look like."

You can check out what the MSU camo jersey looks like in our post from last Saturday. A picture of North Carolina's camouflage jersey is after the jump (via The Dagger). 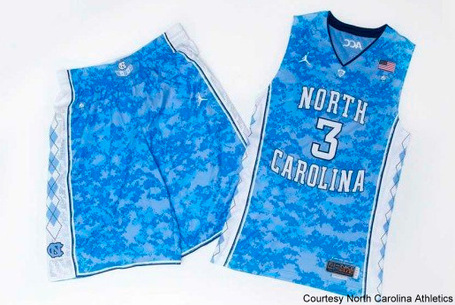 UNC decided to officially announce the jerseys earlier this week. I would guess that Michigan State will make an official announcement with pictures of their camouflage jerseys in the near future considering the game is two weeks from Friday.