Share All sharing options for: Oops! Victoria's Secret Gets Michigan Schools Mixed Up

Which Michigan school has "Hail to the Victors" in its fight song?

Apparently, the people at Victoria's Secret experienced some confusion with that rather significant tidbit. What other conclusion could be drawn after seeing this printed on its "Michigan State bling scoopneck tee"? 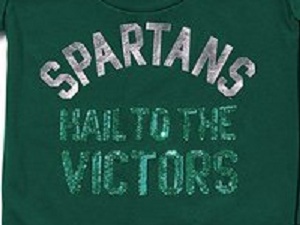 Either that or someone who designs these shirts or organizes the Victoria's Secret online catalog is a Michigan grad or fan with a wicked sense of humor. Maybe that's — gasp! — Victoria's secret!

Actually, as we're writing this, it appears the Victoria's Secret people have caught the mistake and removed the item listing. They still probably could've sold plenty of those shirts if they'd draped one over Adriana Lima. (But the photo is still available, as you can see here.)

Or waves of Spartans fans have let the retailer know that this will just not stand, and attacked customer service reps like they were Persians at the Battle of Thermopylae. Victory for MSU... ?

But before the crackdown, perhaps some Wolverines fans purchased some of those shirts (sure to be collectors' items) as gifts for the special Spartans fans in their lives.

OK, you can now go back to looking at the other stuff you were looking at on the Victoria's Secret website.