Quite a few details were released this week about the basketball game between Michigan State and North Carolina that will be played on an aircraft carrier on Nov. 11, 2011. Among the new details are how tickets will be distributed, the start time and what the setup will look like for the basketball court.

Starting with the ticket information, you're going to have to be a member of the armed forces or a pretty important person at MSU or UNC to watch this game in person. There will be bleacher seating for 7,000 people on the deck of a yet to be determined aircraft carrier (likely the USS Ronald Reagan or the USS Carl Vinson). The 7,000 tickets will be distributed by giving 750 to each school, 400 to "coaches participating in a clinic," 1,000 to the Morale Entertainment Foundation and its partners (the Navy-Marine Corps Relief Society, Wounded Warrior Project and the San Diego Air & Space Museum) and approximately 4,000 to military personnel.

If it were to rain or the weather didn't cooperate in some other way (i.e. windy day), the game will be moved to the hangar deck, where there will still be seating for fans. If the weather does cooperate, it will be played on the deck of the aircraft carrier, with tipoff set for around 4 p.m. Pacific Time (the game will be in San Diego). Here is a look at the proposed setup: 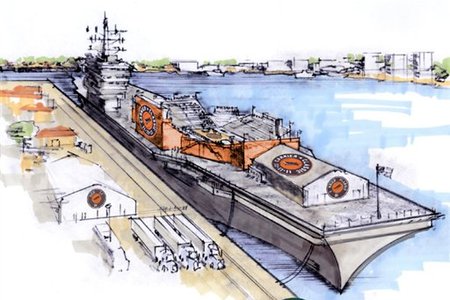 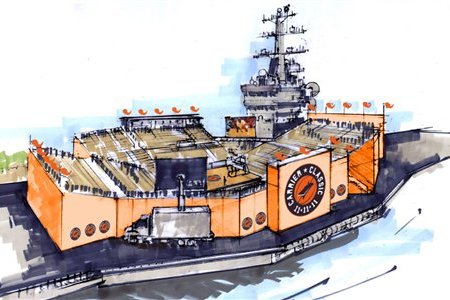 Michigan State has the option to play another game on an aircraft carrier as part of the "Carrier Classic" in 2012. The likely opponent would be Duke, and the likes of Texas, Ohio State, Florida, Navy, San Diego State and Notre Dame are in consideration for games beyond 2012. Also, a women's game is apparently being considered for 2012 or 2013.