Michigan Stadium's massive renovation concluded last summer, but that doesn't mean that work on the Big House is going to stop this upcoming offseason. In addition to widening the aisles and seats in the bowl of the stadium, it appears as though a pair of new scoreboards may be added in 2011.

In a Q&A with The Detroit News, Michigan athletic director Dave Brandon reiterated that he hopes to have the new scoreboards ready to go for next season. He also gave an estimate about how much bigger the new scoreboards might be compared to what currently is in place at Michigan Stadium.

Q: You also have talked about new scoreboards for Michigan Stadium. Your vision is not Cowboys Stadium huge, but pretty huge?

A: Pretty huge. If you picture the size of those (current) scoreboards and maybe something that's 30 percent larger, 40 percent larger, but then the entire surface or at least the vast majority of the surface would be video screen. I think those scoreboards look wimpy now with this structure and then the fact the HD video portion is only about a third of the surface. We can't do what our fans want us to do in terms of showing them really high-resolution replays, game action and even a lot of the marketing stuff we're doing with videos and pre-game and halftime shows — these screens are just not acceptable. This is very old technology, and they don't look very good, either. Think 30 or 40 percent larger and think big-image area for high-definition resolution screens. I think our fans will love it.

Pretty much all of what he said echoes the sentiment of fans. The scoreboards may have only been installed back in 1998, but video technology has changed a lot since then and the scoreboards need to be changed and brought into the 21st century. HD needs to be added to them, and they need to be made bigger as well. I wouldn't necessarily say this upgrade is long overdue, but now that the renovation is complete, they are looking out of place, as Brandon suggested.

After the jump you can find two images I put together that compare the size difference between the current scoreboards and the potential new ones (based on a 35 percent increase in size). 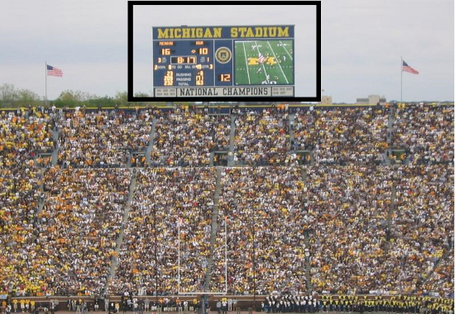 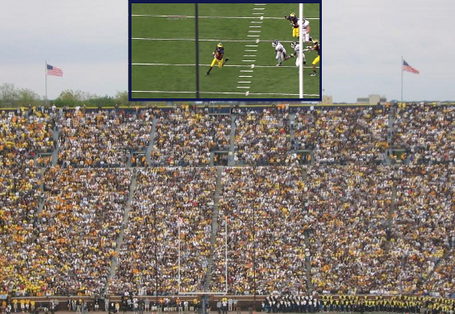