Michigan quarterback Denard Robinson made some headlines when he joined Twitter, mainly for how quickly he added a big number of followers. He crossed the 10,000 followers mark in a matter of days, and currently he has about 28,000 followers.

On Thursday, those 28,000 followers were treated to quite an interesting series of tweets. Somebody hacked Robinson's account, and based on the tweets it appears an ex-girlfriend was responsible. Nine tweets were sent out by the hacker over 20 minutes, and they indicated the hacker was pretty mad.

Robinson's account disappeared for a few minutes before coming back with all of the hacker's tweets deleted. There was a new tweet that didn't appear to be from Robinson and claimed the account was recovered and in good hands. The account was suspended by Twitter a few minutes later, which is probably for the best.

You can check out a recap of the tweets that were sent out by the Robinson's hacker after the jump.

The first set of post-hack tweets: 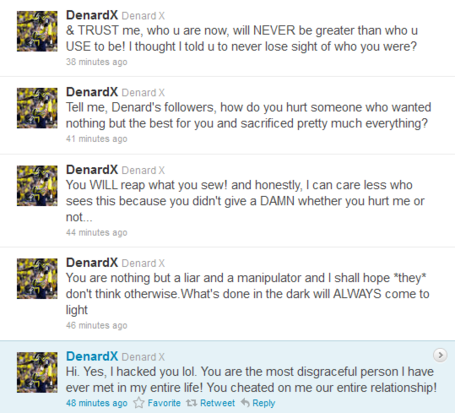 The hacker even conversed with Robinson's followers: 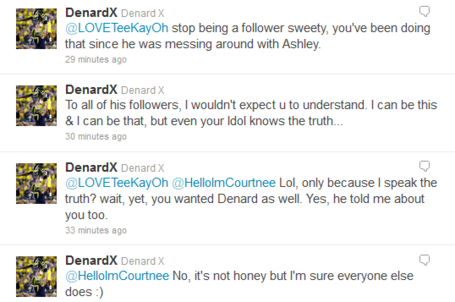 The first piece of advice for Robinson in the wake of this is to use a stronger password and make sure your account is locked down. The other piece of advice comes from Michigan commit Ondre Pipkins:

Well said. Run, Denard. Run as fast as you can.