So far this season, Michigan has deviated from its traditional uniforms on a few occasions. First, the Wolverines wore "Legacy Uniforms" for the night game against Notre Dame. Then, starting with the Minnesota game, they decided to add numbers to their helmets for the rest of the regular season. A couple weeks later, Michigan surprised everybody by wearing what was essentially a road version of the Notre Dame jersey against Michigan State.

Despite Michigan athletic director Dave Brandon saying just last week that Michigan had no plans to wear special jerseys for the 2012 Sugar Bowl against Virginia Tech, it looks like that is exactly what the plans call for. Both the MDen and Moe Sport Shops are selling a special Sugar Bowl jersey (via mgoblog), and you can check out a picture of it after the jump. 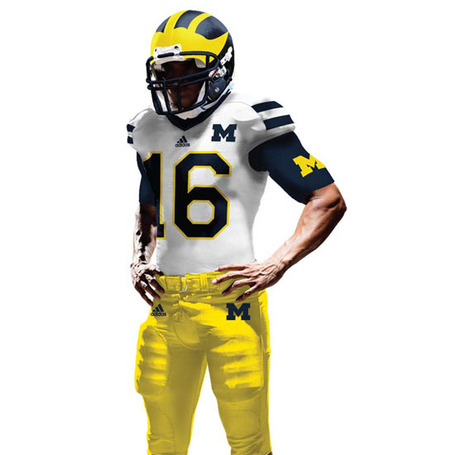 Those don't look all that bad (aside from the stupid adidas stripes on the shoulder), and it's not like Michigan's actual road jerseys are anything special, but again, Brandon said this just one week ago:

Brandon said there are no plans for U-M to make the game unique with jersey changes -- as they did twice this season against Notre Dame and Michigan State -- or any other unusual events.

"We think the BCS makes it enough of a special game, in prime time and on Jan. 3," he said. "And with what the bowl has planned for the guests, it will be (exciting)."

I suppose this shouldn't come as too big of a surprise. After all, it's not the first time Brandon has lied about Michigan's jerseys.

UPDATE: On Tuesday night, Michigan confirmed it will use this jersey design for the Sugar Bowl.