Back in January, the Michigan Board of Regents approved plans to install new HD scoreboards at Michigan Stadium, Crisler Arena and Yost Ice Arena. Michigan spent the last few months getting those plans together, and they were announced this afternoon.

TS Sports/Lighthouse will provide the new scoreboards. Two new ones will be installed at Michigan Stadium, and they will be LED screens that are 40 percent bigger than the old scoreboards. Specifically, the video screens will be 47 feet tall by 85 feet wide with a resolution of 900 x 1632. The size of the structures that will house the new scoreboards will be 62 feet tall by 108 feet wide. Based on the square footage of the video portion of the scoreboard, Michigan's new ones will place in the top 10 in the nation in terms of size, and let's not forget that there will be two of them instead of only one like most stadiums.

Renderings of the new scoreboards for Michigan Stadium, Crisler Arena and Yost Ice Arena can be found after the jump. 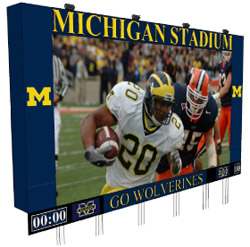 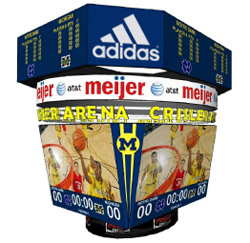 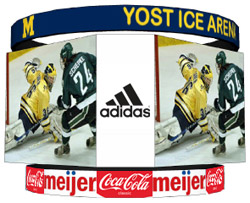