Michigan has revealed the throwback jersey (or legacy jersey, as Michigan is calling it) it will wear against Notre Dame on Sept. 10 under the lights of the Big House. The jersey was unveiled at a press conference in one of the Michigan Stadium structures and in front of a banner with the logos for Michigan, Notre Dame, Adidas and the "Under the Lights" game (yes, they are even branding the night game with a logo).

Denard Robinson and Ryan Van Bergen served as the models for the uniform, which features maize stripes on the shoulders, a block "M" logo and small number on the front, numbers on the helmets and a gray-colored facemask. Take a look (picture via Andy Reid): 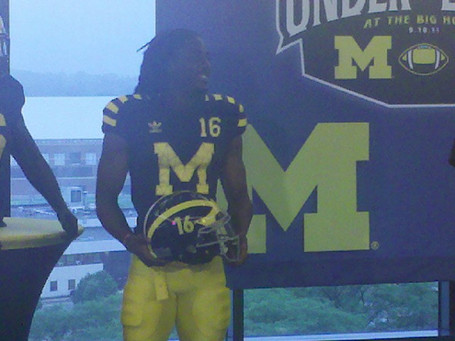 As expected, Michigan's jersey looks exactly like the one that leaked out on the MDen's website earlier this week. That means that athletic director Dave Brandon was flat out lying when he denied the picture obtained by the Free Press last month was a model of the jersey. It turned out that picture was indeed an accurate representation of what Michigan will be wearing.

I will admit that the jersey doesn't look as bad on the players as it did in the pictures that leaked out, but I'd still prefer Michigan not look ridiculous on national TV in its first ever night game and go with its usual home uniform instead. If the uniform has to be different, I think Adidas could have come up with something better than this, as evidenced by Notre Dame's jersey, which really doesn't look all that bad. 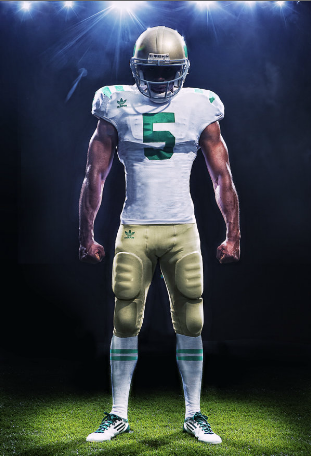 At the end of the day the jersey obviously doesn't matter, especially if Michigan wins the game. The bottom line is this was a business decision, as Michigan will undoubtedly make a good chunk of money from selling this jersey in stores and by auctioning off the game-worn ones following the game. Michigan will also make money by branding this as a "legacy game," which will feature old-style uniforms for Michigan, Notre Dame, the cheerleaders and even the referees.

Again, at the end of the day it doesn't matter what Michigan is wearing as long as the Wolverines win. And the players did say they like them, so it's not all bad by any means. Still, I'm not a huge fan of some of the marketing things Brandon is doing. Obviously there is a need to make money, but there's a fine line and Brandon is approaching it.

The only other thing I will say is that if a dancing Arby's curly fries mascot shows up like at the Big Chill, I'm going to grab my torch and pitchfork. If not, I can deal with a one-time jersey, even if it isn't the greatest-looking thing in the world.