With the University of Michigan baseball team in Port St. Lucie, Fla. — spring home of the New York Mets — over the weekend, it wouldn't have been unusual to see some maize and blue in Mets camp. Owner Fred Wilpon is a Michigan graduate, which is why the Wolverines play in Port St. Lucie every spring (and the school's baseball and softball complex bears his name).

So is that why Mets third baseman David Wright was wearing Denard Robinson's No. 16 jersey on Monday morning? Here's a photo (and you can click the link for a bigger image): 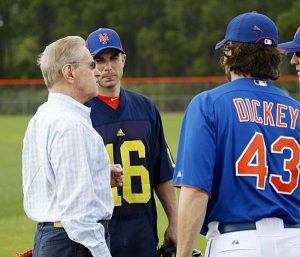 Was Wright just sucking up to the boss? (Maybe he saw the $100 million contract extension that fellow third baseman Ryan Zimmerman received from the Washington Nationals on Sunday, and figured it's time to work out a new deal.)

As it turns out, Wright was paying off a bet, believed to be made with Mets COO Jeff Wilpon. Wright is a Virginia native and Virginia Tech fan, while Wilpon presumably roots for his father's alma mater, so the two decided to make the result of the Sugar Bowl between the Hokies and Wolverines a bit more interesting.

Almost two months after Michigan's 23-20 overtime victory over Virginia Tech in New Orleans, Wright finally paid off his wager with Wilpon. No word on whether or not Wright had to buy the customized jersey. (We assume he wore a No. 16 jersey because of Robinson's popularity.)